> Suds from the Soap Box

During the afternoon of July 6, 1957, an overlooked event took place in the seaport town of Liverpool. Ivan Vaughan, a mutual friend of the band, invited Paul McCartney to hear The Quarrymen perform on stage. The leader and singer of The Quarrymen was 16 year-old John Lennon.

In July 1997, the former members of The Quarrymen reformed their skiffle group to perform on the 40th Anniversary of that momentous day. The song writing partnership of Lennon-McCartney, forged all those years ago, would empower The Beatles to take the world's youth by storm, leading the British Invasion of America on February 7, 1964.

After their innocent introduction, McCartney impressed Lennon with his rendition of "Twenty Flight Rock". Lennon later sent word through another friend that Paul was welcome to join his group. The friendship between Lennon and McCartney would form a foundation for their musical partnership that would begin to flourish rapidly as time progressed.

McCartney had another mate who was a young guitarist, looking to play guitar in a band. George Harrison auditioned to join The Quarrymen by playing "Raunchy" on his six-string machine. A rotating cast of several young musicians would come and go within the ranks of The Quarrymen, but the tight nucleus of John, Paul & George held firm.

The Quarrymen pooled together a few quid amongst themselves to finance their only recording session at Phillips Sound Recording Service in 1958. "In Spite Of All The Danger" remains the only McCartney-Harrison composition, commercially released on Anthology 1 in 1995. Drummer Colin Hanton and pianist John Lowe embellished the triple guitars of John, Paul & George on that 78 rpm acetate.

On August 29, 1959, Mona Best launched the Casbah Coffee Club in the basement of her dream house. With short notice, The Quarrymen eagerly agreed to appear on opening night at the Casbah. John, Paul, George & Ken Brown would then meet Pete Best, drummer for The Blackjacks. The birth of the Merseybeat Sound has its roots at the Casbah Club.

A few name changes and one year later, The Beatles were ready to depart for their first tour of duty in Hamburg. Having always faced the problem of keeping a steady drummer, the lads recommended the name of drummer Pete Best to their manager. McCartney made the phone call himself to invite Best to join the unit for their stint in Germany.

John, Paul, George, Stu and Pete jammed on stage for extended sets as The Beatles. The British quintet had left the comfort of their Liverpool homes for the illicit environs of Hamburg. With the departure of Stuart Sutcliffe, McCartney assumed a new position on bass guitar, and the embryonic sound of the Fabs began to take shape. Ultimately, Pete Best would exit two years hence in August 1962.on and trumpet solo before the horn section returned with an empowered horn assault for the coda.

Fast forward to July 6, 2007. The reunited Quarrymen headlined in Liverpool over the weekend at several engagements to commemorate the 50th Anniversary of the day John Lennon met Paul McCartney. Rod Davis, Len Garry, Colin Hanton and John Lowe have been enjoying a revival of their own, playing for audiences around the globe over the course of the last decade. The Quarrymen have released two excellent albums to their credit.

Coincidentally for American Beatles fans stranded stateside, another ceremony was hosted by Paul Davie of The Fab Five in Liverpool, NY. The Fab Five opened for the Pete Best Band at Meghan MacMurphy's Pub and later returned to close the evening with guest jams from PBB members.

Davie welcomed Pete Best front and center to recognize Best as the Charter Inductee with the "All You Need Is Liverpool Music Hall of Fame". Davie read aloud the inscription of the certificate to the SRO crowd, also being taped by local media during the presentation. 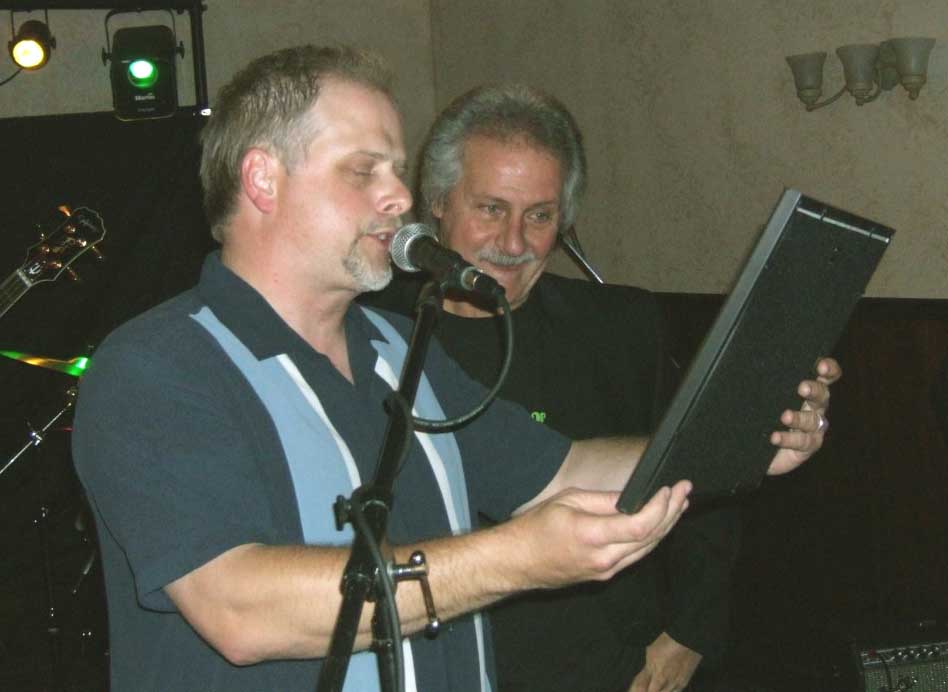 Awarded on this day, July 6, 2007 to PETE BEST of Liverpool, UK
For your contributions to the formative years of the greatest recording act in the history of modern recording and popular music - THE BEATLES - in the years 1960 to 1962.  Also, for demonstrating to the entire world a level of humility, honor and dignity that we all hope to achieve.  And finally, for two stellar performances in your sister city, which inspired the creation of an annual music festival - "All You Need Is Liverpool" - to benefit local breast cancer research efforts. 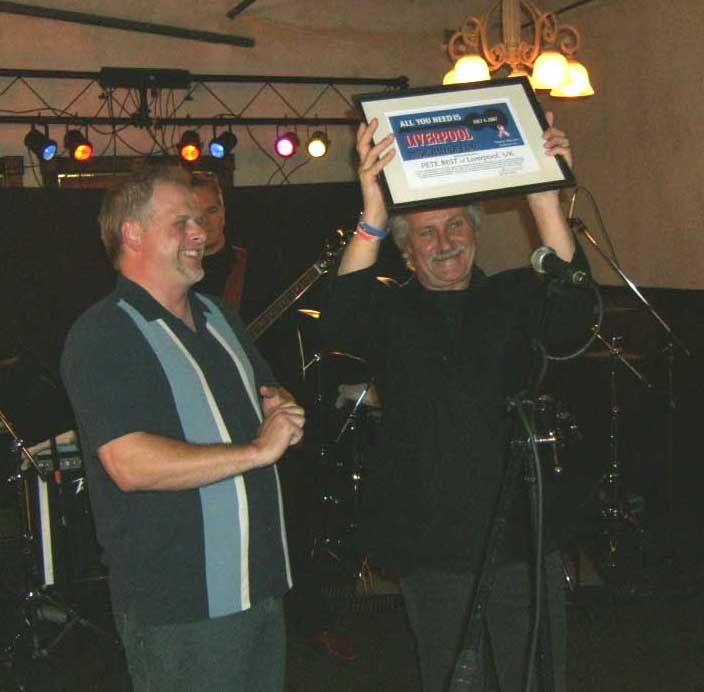 Davie designed a unique commemorative admission ticket for the July 6 concert in Liverpool, in addition to distributing a complimentary reproduction of the original Garden Fete brochure announcing The Quarry Men Skiffle Group that was handed out in 1957 at Saint Peter's Church Field.

Best brought his history with The Beatles and the magic of their music for those who turned out Friday night. Pete had spent two solid years behind the skins, driving the emerging sound of the early Beatles. Several Beatles tracks with Best on drums can be heard on Anthology 1. Having released a biographical DVD that was broadcast on PBS, Pete Best is no longer the forgotten Beatle.

Predictably, Pete Best and the PBB received a rowdy welcome in Liverpool. The road-seasoned quintet delivered a lengthy 22 song set with the level of intensity once heard in the Cavern or Hamburg. The PBB worked in a solid seven original Beatles tunes to remind the crowd what the Fabs sounded like on stage in 1961.

The PBB are Tony Flynn & Phil Melia on guitar with Paul Parry on bass. Together, all three talented singers share lead and backing vocals. Pete is joined by fellow drummer and younger brother, Roag Best. Not flaunting himself as a shallow attention hound, Pete relies on the hidden strengths of this band to impress and entertain its audiences. 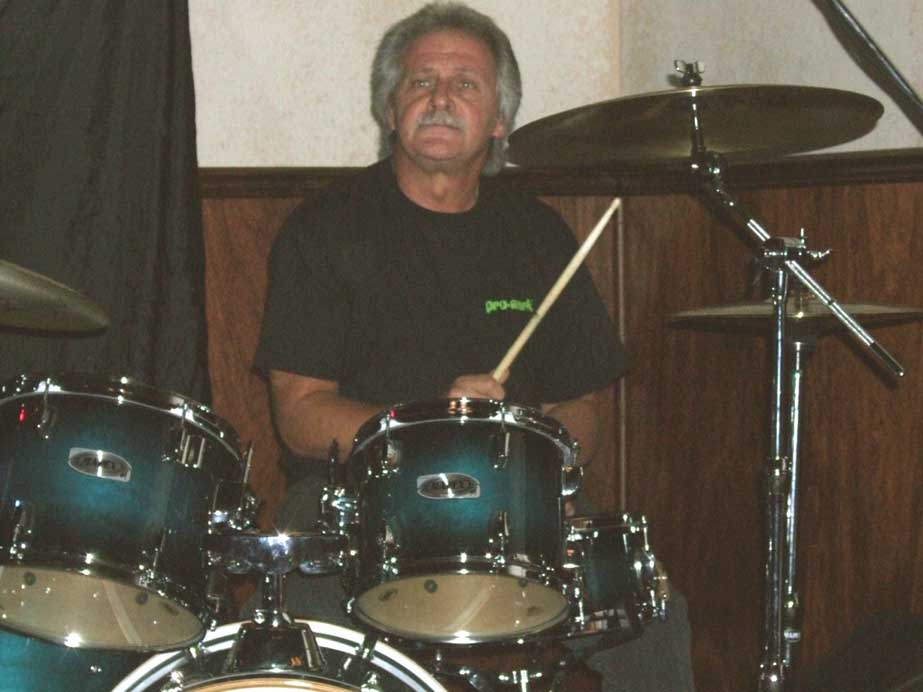 RockonTour: What does the significance of today's anniversary mean to you?
Pete Best: 50th anniversary of John met up with Paul ... if you look at in hindsight; maybe The Beatles would not have met up and we would not have had the song writing partnership of Lennon & McCartney.

RockonTour: How does it feel to have played an important role in the formation of the Beatles sound that captured a global generation?
Pete Best: Everyone was doing a job. What we were doing in Hamburg captured the imagination of the fans of Liverpool and Hamburg 'cause what we did made us the best rock and roll band ever.

RockonTour: Where do you find the energy to play the drums night after night?
Pete Best: It's genetic. It runs in the family.

RockonTour: So Many fans want to shake your hand after your concerts. Does it amaze you that the impact of The Beatles continues to resonate into the new millennium?
Pete Best: Not really. They were the icons of the music industry and they left a musical legacy, which will always live on.

RockonTour: What do you hope fans will take away after hearing the new PBB album?
Pete Best: Happiness, contentment, love and enjoyment.

Pete Best spends the time to meet fans that attend PBB appearances. Following the Liverpool performance, Pete made himself available to sign autographs and pose for pictures with those who waited patiently in the queue to meet a Beatle. There is a wide selection of PBB items as souvenirs to take home, but the true fans anticipate the release of the new album the PBB are currently recording back home at the Casbah Coffee Club studio.

Looking after the PBB on tour is Teri Rousseau. She interacts with the PBB street team who promote the tour dates and welcomes the web frembers who turn out in support of Pete with a big smile. By the way, www.PeteBest.net recently received a facelift so if you haven't checked out Pete's cyber address, click on by and join in on the chatter.

John, George and Stu are no longer with us. 50 years may have passed by quickly, but for McCartney, he will remember John quietly and cherish his memories of that garden fete held in Woolton. Happy 50th Anniversary to Beatles fans the world over who enjoy the wealth of music that endures, and congratulations to Pete Best for being blessed to be a participant in the Greatest Show on Earth!

Liverpool setlist: Slow Down * What I'd Say * One After 909 * Please Mister Postman * P.S. I Love You * Roll Over Beethoven * Besame Mucho * Hello Little Girl * Like Dreamers Do * Till There Was You * Long Tall Sally * Rock And Roll Music * Money * Cry For A Shadow * My Bonnie * Ain't She Sweet * Sweet Georgia Brown * Some Other Guy * I Saw Her Standing There * Twist And Shout * Kansas City/Hey, Hey, Hey, Hey * Encore: Johnny B. Goode